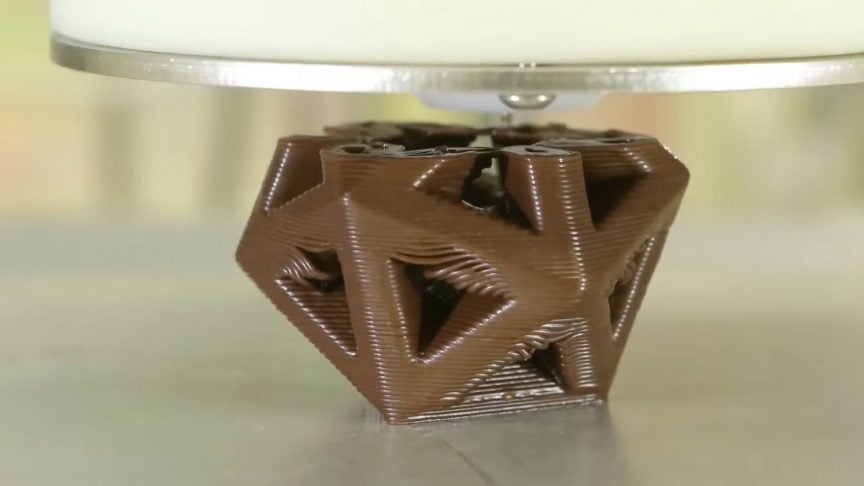 The year is 2035. Sitting at my desk, later than usual finishing up the day’s work, I open an app on my smartphone and search for ‘pizza’. ‘You have the ingredients for that’ pings back to me and I click ‘ok’. Another message appears ‘how many servings?’ I select ‘one’. A clock function appears, and I choose 8pm. A confirmation message arrives: ‘pizza ready in 15 minutes’. I complete my last task and wander down to the kitchen. Checking the machine on the corner cabinet, I see that the pizza is almost done. A timer goes off and a message on the machine reads ‘your pizza is ready’. I grab a plate, slide the pizza on, and head to the dinner table.

The pizza is a simple margherita, but it was made with ingredients designed for my specific nutritional requirements, taste preferences and allergies based on information I provided to the company that makes the ingredients and sends them to me on a monthly basis.

The machine prepared only the amount of food I would normally eat, according to information I programmed into its computer, so I didn’t waste anything. Because the ingredients have a long shelf life, I also throw less away due to spoilage. And I can make more than just pizza – the machine offers me sandwiches, burgers, pasta, and more.

What is 3D printing anyway?

For the uninitiated, 3D printing is the layer-by-layer production of a physical object. 3D printers work through a combination of robotics and good old-fashioned computer-aided design (CAD) – the same technology that architects and engineers have been using for decades to design buildings and other structures.

Otherwise known as additive manufacturing, the technology is now widely used in a number of sectors, from aerospace to healthcare. Some of the developments in the last few years include heart pumps, rocket engines, and jewellery. From a manufacturing perspective, 3D printing brings the potential for speed and cost reduction, including rapid prototyping and ‘mass personalisation’ of items on demand.

3D printing has existed in some form for more than 30 years, although it has only become more widely used in the last decade or so. 3D-printed food has been of interest since the technology was developed, but compared to other sectors, additive manufacturing has evolved more slowly in the food sector. One big reason for that is because the inputs needed (in food terms, the ingredients) can spoil. Long-shelf life is important.

Existing technology requires the ingredients to be extruded through a nozzle, which means they need to have a gel or paste-like consistency. This works fine for pasta or chocolate but makes it harder to create more complex meals of the type that we’re used to, so there’s an issue of cultural acclimatisation to consider.

And while we don’t have to wait until 2035 for automated, at-home, 3D printed food, the costs are still prohibitive. A 3D food printer can be purchased today, and there are some that cost only a few hundred dollars, although these are limited to chocolate and pancakes. The more versatile options cost $2,000-5,000 (£1,400-£3,600).

Since even the best 3D food printers still have a lot of limitations, when combined with their costs, they remain more of a novelty than necessary kitchen equipment – out of reach for all but the most well-heeled food and technology fanatic.

Still, there was a time when the microwave oven was viewed skeptically as a home cooking appliance. The earliest machines cost thousands of dollars, took up a lot of space, and were viewed as a potential health hazard. Today they are virtually ubiquitous in the domestic kitchens of high-income countries. More than 90% of Americans have one.

High-end restaurants have been early pioneers in the use of 3D food printers. Perhaps the most well-known of these is Food Ink, which bills itself as the world’s first 3D restaurant, having gone so far as to create everything — from the chairs to the food — using additive manufacturing. It opened in London in 2016 and then took the concept on world tour as a pop-up dining experience.

But other high-end restaurants are using the technology in more subtle ways, to produce food from custom designs that would otherwise be impossible to create by hand. Automation also frees up kitchen staff to work on other aspects of the menu, removing one time constraint in a labour-intensive business.

Beyond restaurants, Barilla, the Italian pasta maker, has also led the way in 3D printing. The company holds an annual design competition for pasta shapes, effectively crowd-sourcing ideas that can be tested using their 3D printing technology. The idea is that the geometry of pasta affects its flavour and taste, as well as how it interacts with the sauce. The company began experimenting with 3D printed pasta in 2010 and built its own printer in 2015. Although 3D-printed pasta remains experimental at Barilla, they are looking at opportunities for mass production, and particularly the potential for advancements in gluten-free pasta-making.

So far, 3D-printed food has been most successful in respect of design (and in the case of pasta, for example, also its function). Cakes, chocolates, pasta – all items where intricate details can be a benefit, and the material inputs are fairly stable (e.g. sugar) and uniform (i.e. a single ingredient). Pizza is also fairly straightforward. But the technology offers the potential for much more than that.

Geeks like me will remember the moment in the ‘Big Bang Theory’ when Howard and Raj decided to buy a used 3D printer to make picture-perfect superhero models of…themselves. That episode dates to 2013 when 3D printing was only just emerging as a more mainstream concept.

But the idea of personalisation – that we can make objects for ourselves, in our own image (literally and figuratively) is one that has become more salient for food, as well for additive manufacturing. Bringing these two ideas together (i.e. personalised food and personalisation through 3D printing) suggests great potential for our enjoyment of food as well as our health.

For example, personalised food for the elderly has been a focus for additive manufacturing. One in five elderly have dysphagia – which makes it difficult to chew and swallow. An early EU-funded project looked at the potential for developing a ‘personalised food chain’ for individuals in this group. Meals are tailored to the specific nutritional and taste preferences of each individual, prepared by a company, and shipped ready to be microwaved by the consumer.

A more recent project builds on the concept of creating personalised food for the elderly using 3D printing and nanoscale technologies to deliver foods that are both nutritionally enhanced and with sensory properties that make them more appealing to consumers.

3D printing is still a long way from becoming mainstream in food preparation. But if those working on the technology get it right, it will also be a major benefit from a sustainability point of view.

By ‘printing’ only the food necessary, the technology can be a part (even if a small one) of the changes needed in our food system to reduce the vast amount of waste we currently generate post-manufacturing.

It also offers the opportunity to create foods from ingredients that might otherwise have been thrown out. Michelin-starred restaurant Cocina Hermanos Torres operates a zero-waste kitchen, thanks in part to their 3D printer which enables them to print around 100 dishes a day, including a 100% zero-waste dish.

At the forefront of some of these initiatives, Redefine Meat’s Alt-Steak uses 3D printing to turn plant-based proteins into products that look and taste like real meat. Their Alt-Steaks also deliver the same amount of protein as beef steak, but with more fibre, less fat and no cholesterol. An assessment by the company found it uses 90% less water, 95% less land and emitted 90% fewer greenhouse gases in its production. There’s a real opportunity then, to address both health and environmental concerns associated with meat production and consumption.

Will the future of food be 3D printed?

To my mind, there’s no substitute for a meal made of mostly whole foods, and the fresher, the better. I enjoy making my own food more than the idea of a machine making it for me (although obviously not everyone loves cooking).

Still, the experience of food is complex. It has social and cultural dimensions, in addition to satisfying our basic needs and maintaining and improving our health. If it can also prove its sustainability credentials, the technology could help deliver the ‘double win’ of improving human and planetary health. I hope 3D printing will become one of the tools in our growing arsenal for creating ever better food systems.