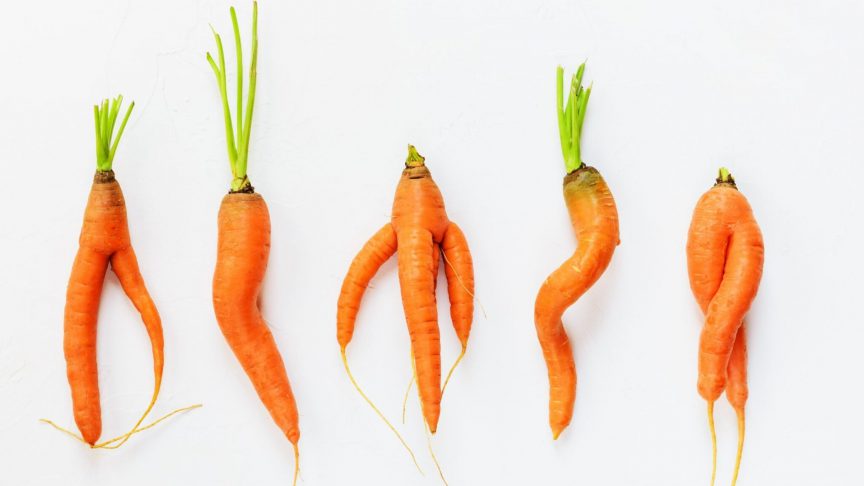 As I was preparing dinner the other night, my husband wandered into the kitchen and looking at the vegetables next to the chopping board said, apropos of nothing — ‘that’s some wonky carrot!’

Indeed, it was. A totally crooked carrot can come as a bit of a shock when you’re used to the produce that most supermarkets sell, pushing out perfectly straight, uniformly sized, and unblemished carrots (and every other sort of fruit and veg). Of course, for anyone who has grown their own vegetables, a ‘misshapen’ carrot is par for the course. But how many of us grow our own carrots these days?

This post isn’t about grow your own, however. It’s about standards for quality produce and the resulting food waste that’s come from the drive towards a particular view of what constitutes perfect fruit and veg. And it’s about the changes that are beginning to appear in our food systems, which resulted in me buying a wonky carrot from the local supermarket…

First a word about perfection in our produce. I live in the UK, where until Brexit, trading standards for fruit and veg have been set by the European Commission for the whole of the EU. These rules have long dictated precise weights and shapes as a measure of quality for many classes of produce, including carrots.

Finally, in 2008, the rules were relaxed, allowing the sale of 26 different types of ‘wonky’ fruit and veg (including carrots). This was hailed as a triumph in good sense – it made it easier for producers to sell more of their crop and it meant a lot less food went to waste because it wasn’t ‘just so’.

(The rules are still in place, however, for the likes of apples, strawberries and tomatoes. The difference between a perfectly shaped strawberry and a really delicious one can be miles apart, but there are other issues at play there, including transport distances for easily perishable foodstuffs, which make this problem trickier to solve than just relaxing the rules on the diameter that a strawberry must attain to be sold on the supermarket shelf.)

You might think that relaxing the rules for most types of fruit and veg would be enough. And that by now we’d be filling our shopping trolleys with lumpy carrots and knobbly potatoes. But no. More than a third of our fruit and veg gets thrown out – literally discarded – because it isn’t the right size and shape. In the UK at least, carrots and potatoes are the most commonly discarded produce.

As our food systems have evolved, requiring more and more mechanisation to pick, process and pack, the need to have ever more perfectly shaped produce has only increased. Alongside this, consumers have become accustomed to and sought out the most perfectly shaped produce. The assumption, I suppose, is that a nice-looking piece of fruit is somehow better – maybe even tastier – than one with imperfections (this would be a good psychological experiment on the state of our species).

But as any gardener knows, perfection in size and shape can mean a less tasty (and nutritious) result. That’s because we have predominantly geared our breeding programmes for fruit and veg towards shape and size, rather than for taste and nutritional content. The carrots that yield the highest concentrations of vitamin C and have the nicest crunch and the sweetest taste are not necessarily the varieties that grow to the perfect size and shape. And so we have scientifically selected away, ever steadily, from taste and nutrition, towards form and functional ability to make it through our increasingly mechanised food processing systems and appeal to an increasingly fussy consumer.

Still, in the UK, major retailers have run campaigns to promote ‘ugly veg’ in an effort to reduce waste. In fact, that’s how I came to have that wonky carrot – after picking up a large box of mixed root vegetables from the supermarket (and sold at a remarkably good price). Currently most of the major supermarkets have a wonky veg scheme of some kind, including Aldi, Asda, Lidl, Morrisons and Tesco.

Supermarkets have also found ways to include more imperfect produce in their offerings. For example, those bags of carrot sticks, perfectly cut for dipping into a tub of hummous, are often created from ‘less perfect’ whole ones, as well as prepared soups and readymeals, baby food, and so on.

Start-up Oddbox focuses entirely on this issue. Founded in 2016, the company works with farmers to reduce wastage of seasonal produce by sending boxes of fruit and veg to consumers that would not find a retail outlet otherwise. At the end of each week they donate leftover produce to food charities in an aim to help fight food poverty.

Last year, the company secured funding to expand beyond its initial London market across the UK. Since its founding the company has saved 2,000 tonnes of fruit and veg that would have been wasted. Oddbox uses a lifecycle methodology to calculate the environmental impact of this approach in terms of CO2 emissions and water usage avoided. They estimate that each box also saves as much water as an individual would drink in 12 months, and the energy that would be used to power a house for 19 hours.

But it’s not just imperfect shapes that lead to staggering levels of food waste – households purchase more than they eat – and therefore throw a lot away. The hospitality sector is also to blame for significant wastage, which is a result of too generous portions more than a focus on aesthetics.

Moreover, produce that doesn’t meet aesthetic standards isn’t totally wasted on farm – it is fed to livestock and ploughed back into the soil to improve soil quality.

But let’s be honest, every additional carrot that a farmer can sell is a good thing – reducing waste as well as supporting the environment. The inputs to production include water and energy, with consequences for climate change and sustainability.

Each additional carrot sold also supports the farm that produced it and the farming industry, which we rely on and which could do with greater profitability and fewer subsidies to keep them going.

In essence, I would argue, every carrot matters, and we shouldn’t undervalue the importance of making the most of what we produce. Anything less costs the earth.