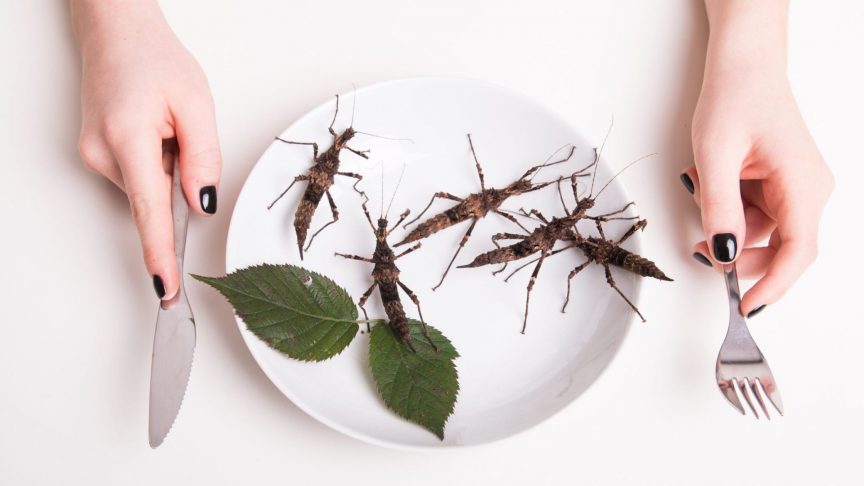 I recently wrote about the potential for insect proteins to shape human and animal diets. Despite decades of research and hype, insects have not become a mainstream food in westernised cultures. Many factors are responsible for the current state of the industry and a combination of economic, political, and social issues will need to be addressed for it to truly scale. But I’m interested in one particular aspect of this story, because it appears as a continual thread in nearly every source I’ve read on the subject. That’s the deep aversion of many people to the very idea of insects as a foodstuff – basically, disgust.

The concept of disgust is closely linked to neophobia – the fear of new things – in this case the introduction of an unfamiliar food. This is the ‘omnivore’s dilemma’. In the search for varied food sources, we have to try new things while maintaining a healthy scepticism in case those new foods happen to be dangerous. Disgust is the emotion accompanying the suspicion that a food could be harmful. The repulsion we feel literally causes us to turn away from – to reject – something that might be poisonous.

While the emotion of disgust has an evolutionary function, it is also socially and culturally specific, tied to beliefs, values, and economic conditions. Indeed, humans have developed the concept of ‘cuisine’ to mediate the process of food selection, and thereby overcome the omnivore’s dilemma to a considerable extent. By selecting and defining what items found in nature are edible, along with how they can be transformed (e.g. through cooking) and the associated rules of etiquette for their consumption, we’ve developed a very sophisticated model for helping to ensure we don’t eat things that can harm us.

Aversion to insects doesn’t have to be permanent

As a result, what we find to be disgusting can vary considerably between groups of people and between individuals. Disgust can be deeply engrained, but aversion to particular foods does not have to be permanent.

I ate my first cricket when I went to Thailand as a graduate student. Over the summer I spent doing research there, I came to enjoy a wide variety of foods that I wouldn’t have otherwise eaten, a great many insects included. I’ve always been a fairly adventurous eater. Insects initially seemed strange, and initially unappealing, but I came around. By the end of that summer, insects had become one of my favourite street foods. Still, I couldn’t get my head around eating durian. The smell of sewage emanating from the so-called ‘king’ of fruits was just too repulsive despite the enthusiasm of a few of my Thai friends for it.

The disgust that some people feel towards eating insects probably has very little to do with its evolutionary role in protecting us from eating something potentially dangerous. Instead, insect-aversion is more likely to be culturally derived. Afterall, about 2 billion people, approximately 30% of the world’s population, consume some 2,000 different insect species as part of their traditional diet.

To appreciate the issue of cultural ‘acclimatisation’ to different foods, insects are often compared to lobster. In the 1800s, lobster was believed to be such a poor food that it was considered cruel and unusual punishment to feed it to inmates in colonial American prisons… ‘Like making people eat rats’ to use David Foster Wallace’s evocative language in his seminal essay ‘Consider the Lobster’.

Today lobster is one of the most expensive items on any restaurant menu. Quite a rise for a giant sea-insect. So it’s not impossible to imagine that one day insects will take pride of place on western dining tables. Afterall, lobsters are consumed with abandon these days.

Alternative proteins have received a lot of attention lately with concern rising amongst consumers and the general public about the impacts of livestock production and associated meat consumption, including health-related problems as well as climate change and biodiversity loss. But alternative proteins encompass a wide array of meat substitutes, including pulses and other plant-based alternatives, cultured meat, algae, and insects. Amongst these, insects have been found to be the least acceptable to consumers.

Nevertheless, a consistent set of drivers have been found to affect food choices. These include personal considerations such as taste, perceptions of healthiness, and values related to environmental sustainability as well as factors in the wider environment such as social norms, price and availability. And all of these factors are closely interlinked.

Of particular importance for insects is the effect of familiarity. This is easy to appreciate for those who grew up in an environment where eating insects is considered ‘normal’. Just as important, however, is the effect of past consumption. Simply having eaten insect proteins in the past can significantly impact future willingness to do so.

That may sound obvious, and it is – but it’s also nontrivial. The importance of familiarity and particularly past consumption helps to explain the current focus of the insect protein industry on incorporating ingredients like cricket flour into well-recognised foodstuffs – for example, cookies and crackers – where there is no visible evidence of insects in an otherwise very familiar food product.

By encouraging familiarity with a food that is not entirely ‘new’ and is less likely to elicit reactions of disgust, insect proteins might just make their way into our everyday diets. Surely the marketing logic goes, if we can get consumers to try an energy bar that includes insect flour, one day those same consumers might be willing to try the whole insect.

A sea change for insect farming?

In the UK, insects have been on the market for a while. A few years ago, they were a niche product in high-end restaurant dishes. And I can vividly recall the first stall at my local farmer’s market selling cricket flour. In 2018 Sainsbury’s became the first national supermarket chain to offer edible insects – a sign of how mainstream the concept is becoming.

The insect protein industry got a big boost this year when the European Food Safety Authority gave a much-anticipated authorisation of mealworms for the EU market. The approval helps to address food safety concerns and ensure that allergenicity is taken into account (since insects can cause reactions particularly in those with an existing allergy to crustaceans). A further 15 applications are under consideration.

Indeed, while there are thriving markets for insect proteins in South Korea and Thailand, the US and Europe now have the fastest growing markets for edible insects in the world. In 2019 the edible insect market was worth $112million. By 2026 it is projected to reach $1.5billion.

Sushi can provide a helpful reference point. The concept arrived in the US as an offering in Japanese restaurants during the 1950s and 60s. By the 1980s, sushi had become popular and restaurants began to open, but even at this stage, restaurant owners were told that Americans wouldn’t eat raw fish. The sector today is estimated at $22billion in the US alone. There’s hope then that insects could become a more widely accepted food. That would be good for people and the planet. Bon appetit.