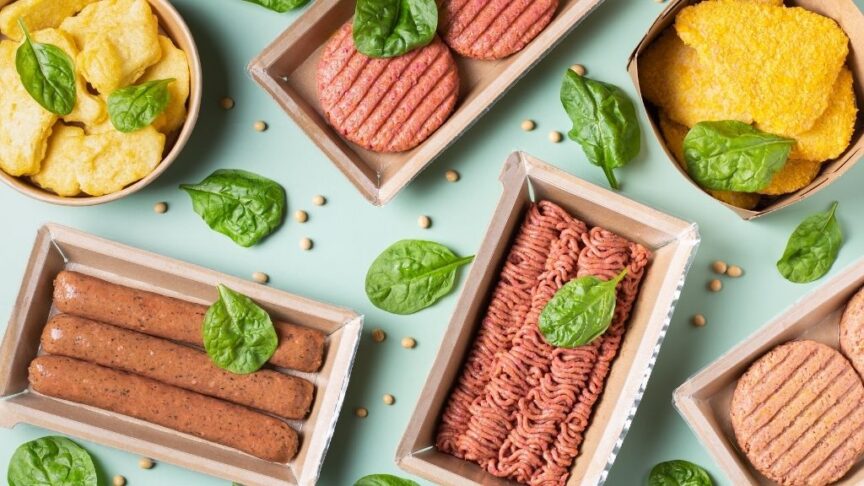 Several years ago, my husband and I decided to stop eating meat for a month. Both of us love steaks, sausages, burgers and…the most irresistible of all meats, to my mind at least: bacon.

For many years we had sourced the meat (and fish) we ate at home from what we were confident were high animal welfare and sustainable sources. And we avoided meat when eating out where we were less sure of its provenance.

The shift was motivated by increasing worry about the contribution to climate change and biodiversity loss of a heavy reliance on meat in our diets.

It was compounded by a growing understanding of the health risks associated with diets high in red meat and processed meat products. This includes some types of cancer and cardiovascular disease. Some studies also point to an increased risk of diabetes and weight gain.

Together, concerns about environmental sustainability, health and animal welfare led me and my husband to try eating differently.

Making the change wasn’t easy, but I haven’t looked back

At first it was very hard. I love to cook, but I had developed an approach over many years that focused heavily on meat as the centrepiece to a meal. Once that core item disappeared, I was adrift.

Although I love vegetables, I didn’t know how to create a satisfying experience with them as the stars of the show. It took time and effort, experimentation with new recipes, and different approaches to food preparation and flavours.

That month-long experiment became a more-or-less permanent state of being.

I haven’t given up on animal proteins altogether – I regularly eat fish and seafood, for example. I’ve also had the occasional hankering for some bacon or a burger, and I’ve eaten it.

But what was interesting about the experience is that once I got the hang of eating (and preparing food) differently – where meat didn’t play such a central role in a meal – I hardly missed it at all.

It’s not just me – meat consumption patterns are changing

I’m certainly not alone. In the UK, market research indicates that meat eaters, who represent almost 90% of the population, are reducing or limiting their meat consumption. The proportion of meat eaters who say they’ve done so rose from 28% in 2017 to 39% in 2019.

The shift seems to be most pronounced amongst those who identify as having a ‘flexitarian’ diet consisting mostly of plant-based foods but still including some meat and fish. In 2021, 12% of Americans and 13% of Brits described themselves as flexitarian, as distinct from a regular meat-eater (59% and 72%, respectively).

By comparison, those identifying as pescatarian (i.e. eating only fish and seafood), vegetarian or vegan together represented only 8% of Americans and 10% of Brits. Because these changes are particularly dramatic for younger consumers (those under 45), it may indicate a longer-term shift away from meat consumption, at least in high-income countries.

A variety of alternative protein choices has aided this shift

A reduction in meat consumption has been possible in part because of the sheer variety of foods that are becoming widely available to many consumers.

Meat alternatives can readily provide the same energy and nutrients as meat.  Plenty of these sources are available on supermarket shelves.

This includes both what we might think of as ‘conventional’ plant-based meat substitutes such as tofu or falafel, as well as those that could be described as ‘meat analogues’ such as plant-based sausages and burger patties.

A few years ago, all of these items occupied a niche corner of the chilled foods section in my local supermarket. Meat alternatives now take up the better part of an entire aisle. I don’t necessarily feel spoiled for choice – the meat options are still 10:1 against the veggie ones. But the increasing variety is leading me to take a closer look at meat substitutes, in addition to other types of plant-based options when I’m doing my weekly food shop.

Rising consumer interest in eating less meat has meant that more food writers and chefs are illustrating how to make tasty, wonderful meals without it. It’s now possible to visit almost any restaurant in the UK and find not just one but several or indeed many menu choices without meat.

The food industry has obviously taken notice in their product formulations. The number of items marketed as ‘meat-free’ in the UK has increased significantly in recent years. Sales of these products grew by 40% between 2017 and 2019.

In the US, total retail sales are growing for foods intended to be direct replacements for animal products, such as plant-based milks (oat milk, soy milk, almond milk, etc.) and meat (burger patties and ground meat/mince).

These kinds of meat alternatives have increased 43% in the last two years – 9 times faster than total food sales. Amongst all new products launched in the UK in 2019, 23% (almost a quarter!) were labelled as vegan, compared to 17% one year earlier.

Meat consumption has been rising steadily for the past 60 years. But data from the past two years indicates that the volume of meat sold worldwide (a proxy for consumption) has remained stable.

For some types of meat (particularly beef) sales have even decreased a bit. And this is despite increasing meat consumption overall in low and middle-income countries. Some projections estimate that Europe and North America will reach ‘peak meat’ by 2025.

Although the number of vegans is rapidly increasing, this group still represents only 1-2% of the population in the US and UK.

All of which seems to point towards the start of a shift in emphasis away from meat, while not necessarily excluding it altogether.

What are the alternatives anyway?

Traditional plant-based meat substitutes and meat analogues are the obvious (and most readily available!) alternative proteins. But they’re not the only ones.

Three other possibilities are on the horizon: insects, algae and seaweed, and cultured (in vitro) meat protein.

I recently wrote about the first of these in a series of posts (here and here) about the future of edible insects. In the posts that follow, I’m going to focus on the others – starting with perhaps the most radical – cultured meat.