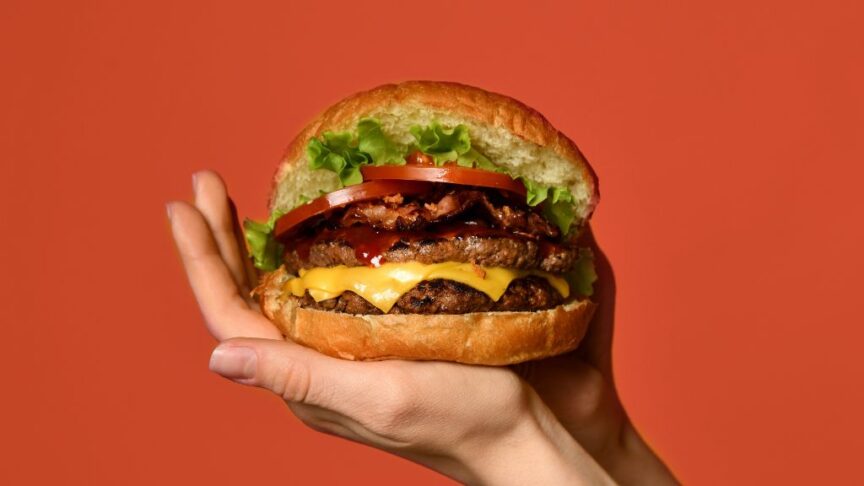 The most striking of these, to me, were those that focused on the price tag: ‘Building a $325,000 Burger’ And rather amusingly: ‘A quarter-million pounder and fries’.

At the time, the technology was very new – revolutionary, in fact. Experimental. Expensive.

‘Lab-grown’ or ‘cultured’ meat refers to the process of growing animal cells in a controlled environment. The result is real meat (or at least something very, very meat-like) but without the need to slaughter the animal for it.

The concept of producing meat without the animal is almost 100 years old. Indeed, Winston Churchill declared in 1931:

‘We shall escape the absurdity of growing a whole chicken in order to eat the breast or wing, by growing these parts separately under a suitable medium’

How prescient. But it took a long time for the technology to catch up with the theory.

Seventy years after Churchill’s prediction, NASA began experimenting with goldfish cells to produce in vitro meat (as the technology was more routinely referred to at that time). Their aim was to fuel astronauts during long space expeditions.

At around the same time, a bio-arts project produced steaks from frog cells, which were eaten at a dinner party in France in 2003. The diners consumed the steaks accompanied by the live frogs from which the cells were obtained. The event served as a provocation to consider this novel relationship between food stuff and animal source.

The method for producing lab-grown meat was still highly experimental, however, with associated eye-watering costs. Initially at least, creating a single cultured meat burger cost hundreds of thousands of dollars.

In the early days of its development, cultured meat was pursued primarily in the interest of space travel and general curiosity about what the technology could achieve. Gradually, early developers and other advocates of the technology articulated the allure of cultured meat in the potential for animal welfare and environmental benefits (more on that in my next article).

By 2013, there was sufficient interest and financial support that a proof of concept could be unveiled to the average consumer. That first burger, consumed in a very high-profile demonstration event in London, made the tantalising promise that lab-grown meat could someday be as ordinary and acceptable as its traditional counterpart.

At the same time, it claimed to be revolutionary. And it was. Cultured meat offers the possibility of radically reshaping our relationship with meat, and the animal lives that are inextricably bound up with its consumption.

Given its promise and potential, why hasn’t cultured meat moved more rapidly towards our dinner tables?

Development of the technology has been constrained in part because it straddles two traditionally disparate fields of study: biomedical research and agriculture. Research funding from public sources is largely divided down disciplinary lines. Getting public support for lab-grown meat has been a major struggle. Yet public funds are often critical for seeding research on unproven technologies.

The non-profit organization New Harvest was founded in 2004, dedicated to bridging the gap left by traditional research funding and smoothing the path from publicly funded research to private sector investment. It was instrumental in facilitating the work that led to that first burger making headlines in 2013, with the support of the Dutch government and Google co-founder Sergey Brin.

Today a lab-grown burger costs about $9

Nearly 10 years on from the unveiling of that proof-of-concept burger, production costs for cultured meat have come way down – by a staggering 99% – to around $9!

In 2019, one headline observed that ‘The $280,000 lab-grown burger could be a more palatable $10 in two years’. That prediction has become reality. If costs continue to fall as they have already, cultured meat could be the same price as its conventional counterpart by 2030.

Still, at present costs remain relatively high for producing cultured meat. The growth medium – the nutrient broth in which the meat cells grow – is a key limiting factor, representing 55-95% of the total production costs.

Part of the reason for this is a focus on finding a replacement for foetal bovine serum in the growth medium, which in the early days of cultured meat represented the only way to utilise the technology. For many, finding an alternative was a make-or-break advancement. As the interest in cultured meat began to focus in on the benefits for animal welfare, the fact that one of the inputs to the process required the death of an animal became a core concern. Now there are alternatives that don’t require any animals to lose their lives. But they’re costly.

From frog cells to caviar?

Investment in cultured meat has been increasing steadily ever since that 2013 demonstration event. There are more than 70 companies working on lab-grown meat worldwide.

And the technology has leapt forward. There are efforts underway to not only produce a conventional beef burger that tastes and costs the same as one derived from a cow. Others are working on pork, lamb and chicken.

Cultured meat is also expanding to include fish and seafood. With growing concerns about overfishing and other risks to aquatic biodiversity, companies are working on cultured bluefin tuna, salmon and even sturgeon eggs to produce caviar.

Developers are also considering whether they need to use cells from species that are regularly consumed in Western diets. For example, at least one researcher is using insects as the basis for creating products that taste like crab or prawns.

3D printing shows a lot of promise for lab-grown meat, with the potential to replicate more solid cuts of meat like steaks, which have so far been difficult to recreate. Researchers in Japan have used the technology to create Wagyu beef.

Where do we go from here?

Regulatory approval is another concern. Only one company has so far received market authorisation for its cell-based meat. And consumers wishing to try out this new food will have to travel to Singapore to try Eat Just’s chicken bites.

Once cultured meat products reach the market, they will also face competition from a rapidly-expanding set of plant-based meat alternatives. Other alternative protein sources are on their way, with growing interest from consumers.

The technology shows a lot of promise. But it’s also important to question the laser focus on protein in an effort to create a more sustainable and healthy food system. Consumers in most high and middle-income countries are not lacking protein. In fact, most of us consume more of it than we really need. And there are many sources of it available to us if we choose them. A healthy, balanced diet requires much more than protein. We can’t lose track of this bigger picture along the way.

Still, I believe it’s important to examine all options, and not be too ready to either support or dismiss approaches that could help us out of the environmental and dietary mess we’re in. With that in mind, look out for part two of this article, which dives into the pros and cons of cultured meat.