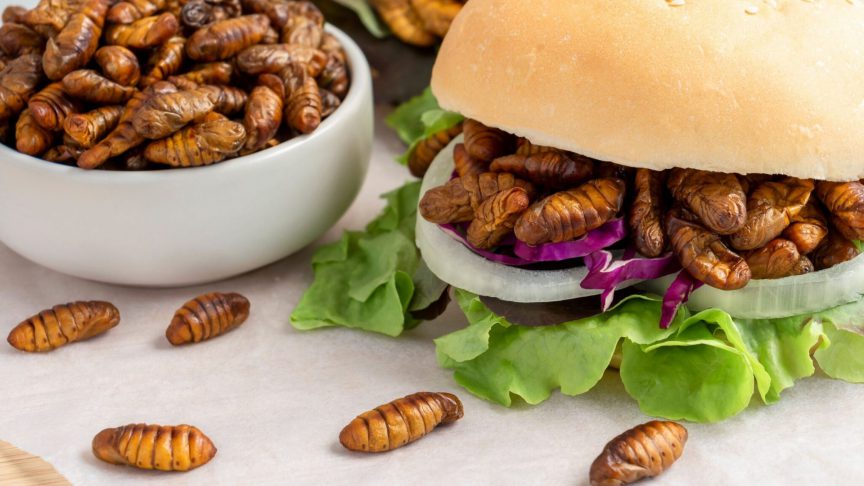 A lot has been written about the potential for insect proteins to become part of our diets. The topic has been investigated in the scientific literature for more than 30 years.

The first ‘killer fact’ that you’ll find reported in many of these sources is the sheer number and variety of insects eaten in different parts of the world—some 2,000 species by 3,000 ethnic groups across 113 countries. Some insects are even considered to be delicacies. Raw, fried, boiled, roasted, or ground – insects are not a ‘new’ food.

Insect diets could provide important nutrients for our health

Over the last five years or so, the shape of the conversation has begun to change, moving beyond a focus on describing the what, where, and how of traditional insect consumption to their potential as a supplement or even replacement for the meat-heavy westernised diet that is growing in popularity world-wide.

Much of this recent conversation related to insect consumption emanated from a landmark study in 2013 commissioned by the UN Food and Agriculture Organisation (FAO). Taking aim at the idea that insects are today mostly consumed as famine foods, the analysis in this report covers comprehensively, and perhaps for the first time, the state of our understanding of insects as an important food stuff.

That’s because from a nutrition point-of-view, insects could be an excellent source of protein, fat, vitamins, and minerals. On average, the protein content of insects is greater than plant proteins. Depending on the insect species, the protein content can also be higher than meat and eggs.

The iron content of some insect species is similar to beef. Insects can also provide a wide array of other nutrients, including vitamins B, C, D, E, and K. Some insects also have high levels of minerals including zinc, calcium, copper, phosphorus, magnesium, and manganese, which could meet a significant proportion of our daily recommended intake.

But because insects are rather ‘new’ to western diets, we still know relatively little about the bioavailability of these nutrients, that is, the human body’s capacity to absorb and make use these nutrients. More research is required, and this is an active area of scientific investigation.

Alongside their potential as a protein and other nutrient source, including insects in our diets could have a positive impact on our natural environment.

The production efficiency of insects is greater than other protein sources, which means less wastage. Insects are between 80-100% edible, compared to 40-50% for livestock.

Livestock farming requires intensive resource use. Currently, 80% of available land is being used to raise animals for meat and dairy production (to rear the animals themselves and produce their feed).

Insect proteins could also support climate change mitigation. The UN FAO estimates that pigs produce 10-100 times more greenhouse gases than mealworms (which have recently been approved as safe to eat in the EU – the first insect to be granted this approval). GHGs for insects in general are expected to be lower than for livestock, particularly when fed biowaste.

There are opportunities for vertical farming that would be impossible for other animals. Although not yet proven, companies investing in this approach have made big claims about the potential to greatly reduce land use and the carbon footprint from insect farming.

But here again, despite 30 years of research, we still don’t really know just how much better insect proteins are—from a sustainability point of view—compared to other animals used for food.

Attention has shifted to insect protein as animal feed

There are two big reasons why we know less about the nutritional and environmental impacts of insect proteins on human diets than we might otherwise. These are novelty and the ‘ick factor.’ Most people who did not grow up with insects as part of their diets are unwilling to try them and find the idea unappealing (if not downright disgusting).

As a result, a great deal of attention on insect cultivation has turned to their potential to form a part of animal diets. We may not become accustomed to eating them directly, but they could become an important component of livestock feed.

Insects are already part of the natural diets of pigs, poultry, and some fish, making them an ideal feed alternative.

Compared to other feed inputs such as soybeans, insects have lower space requirements, supporting a reduction in our land-use. Currently a third of land use worldwide is for animal feed. Insects as animal feed wouldn’t be as beneficial as eating them directly (a similar argument applies to plants), but they would take up far less space than producing feed inputs.

Some early studies have shown the potential for insects to at least partially replace the protein in poultry feed without negative effects on carcass weight or feed efficiency. Aquaculture could also benefit since most cultivated fish species are fed a combination of soybean, corn and fishmeal. An FAO study suggests that insects could replace between 25 and 100 of soymeal or fishmeal in animal feed.

I support the transition towards insects as a component of animal feed, where this has beneficial effects for the animals themselves and supports sustainability objectives. But the evidence is compelling that most of us in high income countries are eating too much meat – both from a health and environmental point of view. Eating less meat, more sustainably reared will have many beneficial effects. Finding healthy protein sources that don’t cost the earth should be a priority. Which brings me back to insects as a direct (rather than secondary) food source…

These days, a typical article on insect diets asks the headline question ‘why aren’t we (in westernised cultures) eating more insects?’ Indeed. Why aren’t we?

Remarkably, what hasn’t changed in the pages and pages that have been written on the subject is the focus on the ‘ick factor’. Basically, many consumers are reluctant to touch the stuff. But why?

That will be the subject of part two of this post.